Look before you play - a sleuthful approach to learning music

Ah...the joy of being at the crossroads between endings and beginnings. A lot of music has been learned, rehearsed, and performed these past few months so it's time to begin anew with a completely different batch of musical projects. I do love finding myself in this place, when every new project is full of anticipation and excitement. But it can also be a bit of a scary, intimidating place too. My husband started all this fun a few days ago when he brought home some music I need to learn for his next recital. The first piece I cracked open was Wolf's song, "Der Soldat II (The Solider II)." Here's what I saw (please do click on the image if you really want to get the full effect): 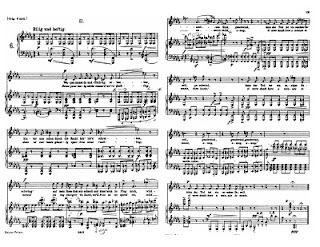 And here are my uncensored thoughts that came to me when I looked at it:

Now what? Well, as with most new music that I get, I decided to stop panicking and to practice what I preach which is to look before I play, to figure it all out before falling into the trap of random, unorganized, slightly or fully desperate music cramming. Here's how I went about learning the music.

Working backwards (I always work backwards), I started with the final 3 measures, asking myself, "What do I see?"

After making these observations, I slowly played each hand separately, at a tempo that enabled me to consciously think through everything I had figured out about the music.  Then I put the hands together and played slowly, in the same engaged way.  After a few times, it was learned and practically memorized.

It's marked fortissimo and it looks a little thick and nasty but...
This isn't so bad...yet.  Onward! Or rather, backward ho!

No double flats yet, but octaves. Yuck. (I have small hands.)

Aack! Double-flats! OK, breathe...figure it out.  Are they scales?
Phew! That's done...all downhill from here...

This measure is basically the same as the second measure of the previous chunk, with the right hand in a different inversion, that's all.

And last but not least...

Ta-da...Wolf's piece is much more understandable to me.  The notes aren't random anymore and now when I practice, I feel like I'm speaking the composer's language because I've taken the time to study it.  I think it's also important to point out that my analysis is not full of profound theory analysis.  There's no Schenker here, no talk of Roman numerals or anything of that nature, largely because I am not very good with that stuff.  I think anyone can become a music detective, making basic observations such as the ones I've made here, to make sense of the black dots on a page.

So next time you need to learn a piece of music, try picking up a musical magnifying glass to see what you can find in the music to make some sense of it.  Just as all those crime investigation shows on TV can be addictive, so can musical sleuthing.  And now I close this post with a famous Sherlock Holmes quote, "You know my methods, Watson."

Now run with those methods and have fun!