It wasn't the Met in New York City.

No cavernous lobby to catch our breathe the moment we walked through the doors.
No plush red velvet seats.
No fancy scenery.
No large orchestra sitting in an illuminated pit below the stage.

But it simply didn't matter.

We had driven 45 minutes to take our 6 year old daughter to her very first opera production, Menotti's Amahl and the Night Visitors, which was being performed for free at an episcopal church by Opera Roanoke.  Growing up around classical music and being subjected quite frequently to opera excerpts thanks to an opera scenes class that my husband teaches every year, our little girl was excited to be able to finally see an opera for herself, live.  And we were just as excited until we got to the church and discovered that the church was already completely full.  It was one of those moments that you dread as a parent.

After several sighs from each of us my husband turned to walk back outside to the car.  I turned to look at my daughter and that's all it took to stop me from following my husband.  I bent down to her level, looked her in the eyes and said, "You're disappointed, aren't you?"  No words were needed from her,  I could see the answer in her eyes.  "OK, we'll stay.  We'll see what we can do," I responded.  She sat down on a bench and waited in silence.  That's not typical for her.

When it came time for the opera to start, my daughter looked up at me and I motioned her over to the main door of the sanctuary.  I told her that if she wanted to see what was going on she would have to go over to the doorway and sit quietly on the hard, cold tile floor.  Looking at me with that look that told me she didn't want to do it alone, I shook my head.  "We can't sweetie.  It wouldn't be polite to the others.  You're small.  You'll be fine and we'll be right here listening."  After only a second's hesitation she crept over to the designated spot and she settled in all by herself.  That's also not typical.

From the moment she sat down she was entranced. 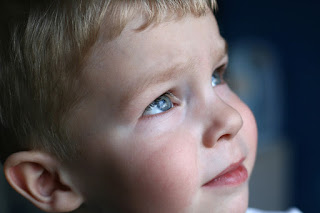 Not long after the performance started I saw some men walking through the lobby toward where our daughter was sitting.  With crowns on their heads and treasure in their hands it was pretty obvious to me that they were the three kings, about to make their grand entrance into the sanctuary.  "This is going to be interesting," I thought, wondering how my daughter would react to having three king-like individuals standing right next to her.  Well they upped the ante - not only did they stand next to her as they awaited their entrance, they started singing right there with her at their feet.  They surrounded her with a sound that I can only imagine from the look that she had on her face.  And as if that wasn't enough, the last man to enter, the kings' page, patted her on the head as he walked by.  I literally thought she was going to burst.  That's somewhat typical for her but normally in the presence of cupcakes, not in the context of a classical music performance.

She remained sitting there on that spot for the entire opera.  When she had to get up briefly to make room for some other singers to make their entrance she stood transfixed without even thinking of running back to our sides, content to stand with an usher that she didn't know at all until she was allowed to sit back down again in her little spot.  Again, not typical.

To watch her watching an opera for the very first time was something I will never forget.  To realize that she didn't need a fancy hall or exquisite costumes and sets to be wooed into the world of opera  was a revelation and a thrill that I can hardly describe.

Here's hoping that going to the opera with her will soon be added to our list as being very typical.