Making sense of Strauss through botany 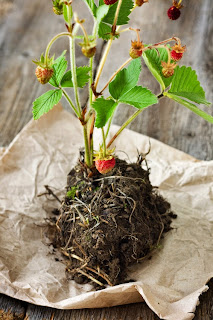 Yes, you read that correctly.  In the course of this one blog post I am going to attempt to use a brief study in botany to unravel an issue I am having in the accompaniment to a song by Richard Strauss.

My problem started with a rehearsal I had with a student vocalist.  I was sightreading Strauss' song, Gefunden.  Everything was going along swimmingly and I was thoroughly enjoying the tranquillity of the piece when we reached the last four measures of the song.  All of a sudden I felt incredibly disoriented.  I stopped the singer, looked at her part to make sure she was singing her line correctly, looked at my part to make sure I was playing the right notes, and then said, "Something isn't right.  I think there must be a mistake in the music."  The singer told me she had sung it over the summer and didn't remember anyone mentioning any misprints in the score so we decided to proceed as if all was well, with me declaring at the end of rehearsal that I would look into the misprint possibility.

Last night I decided to face the music and see what I could make of the situation.  Pulling out the score and opening my laptop to YouTube I found a reputable recording and took a listen.  According to Hans Hotter and Geoffrey Parsons, musicians I figured I could trust, my score was, alas, correct.  Ugh.  Why? Why? Why?

Never wanting to grow enemies with something, especially in music, I decided to do what I do when I find myself starting to glower at the piano or the music.  I became determined to figure out what on earth Strauss was thinking when he wrote the part I didn't like.  (Notice the past tense there...this post is going to have a happy ending!)

The first thing I did was I looked up the translation of the song, reading first through the entire poem, and then focusing on the text in my thorn-in-my-side spot.  Here is a link in case you're curious.  It's a lovely poem by Goethe...the protagonist walks in the woods, encounters a flower which he bends down to pick, has a little conversation with same flower who asks him not to pick her, he digs it up instead and replants it near a house where it grows and blooms.  Lovely, right?  So what are the words when the crunchy, dissonant part occurs?  Here they are:


Now it keeps growing
and goes on blooming.

OK.  Well, that didn't explain anything to me.  I still didn't get what Strauss is doing because I can't see any hint of negativity or angst in those words so I decided to try something else - looking at some theory.

Now before anyone stops reading this post out of fear and distaste for theory, let me assure you, this is not going to get terribly messy.  I am not a music theory nerd and I didn't do that well at it in school but I've always tried to apply it to my understanding of the pieces I'm working on.  My journey with theory, I'm sure, will never end and I'm always trying to learn more through direct application.  With that said, let's look at the score. 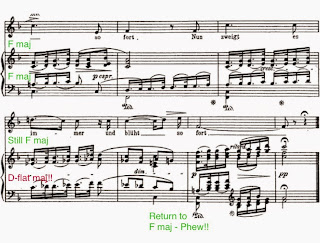 I'm great at looking at keys so let's do that and see if it gets us anywhere.  The song is in F major and for the most part it's straight-forward harmonically, although he does move into A-flat major several times.  But then we get to the first measure on the bottom line, which is pictured above.  Here, the piano, with no warning at all, goes into D-flat major while this time, the voice stays in F major.  F and D-flat major are not the closest of keys and if you look at that first measure you'll see that while the singer is singing a D the piano is playing A-flats, G-flats, E-flats, and C's.  Oh my - lots of dissonance!  Even at the end of that measure, the singer moves down to a C but there's also a D-flat just a half-step up from that in the piano part.  The second measure is not quite as crunchy but I feel pretty confused about where Strauss is going harmonically until the second half of the measure when the piano part abruptly shifts yet again, but this time back to F major to join what the voice has been doing all along.

At this point in my investigation I was intrigued.  I felt like I was definitely onto something.  I looked back at the text again, read the entire poem several times, and tried to picture what was going on.  It was then that the proverbial lightbulb went off over my head.

In this story, a flower, roots and all, gets dug up, carried away, and transplanted to a different location.  I'm not a great gardener but I have tried my hands at it enough to know that moving plants from one place to another has its risks.  Transplant shock is a real possibility which can cause a plant to die.  Perhaps that is what is happening in these two measures at the end of Gefunden.  The piano part is like the plant being suddenly plopped in a completely different place, dealing with new soil, light, and exposure to the elements.  There is a sense of conflict and discomfort.  By the middle of the second measure, however, it has thankfully adjusted and finds itself growing and thriving once again.

Perhaps I'm being far-fetched but in my mind, who cares?  What matters is that now I have an explanation, at least for myself, of why the accompaniment is the way it is.  And now I am eager to try it out with the singer and to see what I can do to make it all work together in the artistic way Strauss probably intended.

Success!  I told you this would have a happy ending, as virtually all my musical investigations do.

I'll leave you in the hands of Hotter and Parsons...enjoy!