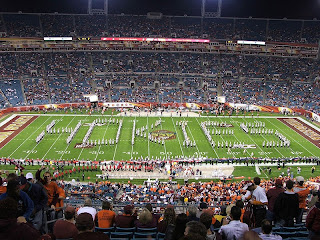 Virginia Tech, in Blacksburg, Virginia, is well known for its football team.  As with so many other college towns, football is the driving force behind much of what happens here.  I don't want to spend much time dwelling on my lack of excitement for something that the rest of the town seems to flock to, after all I do seem to be in the minority,  but I do want to make some observations with the hope that perhaps it will get some locals thinking about another great team on campus that rarely, if ever, gets any attention - the New River Valley Symphony.

The New River Valley Symphony is an orchestra made up of Virginia Tech students and community members.  Their "coach," or conductor, is Professor James Glazebrook, a faculty member from the Department of Music.  Now one thing I want to highlight about this group is that although there is a music department here, many of the orchestra members are not actually music majors so many of the instrumentalists do not have to be a part of the orchestra - they choose to be, in spite of heavy course loads, demanding subjects, and busy social lives.  In my opinion, this is very impressive.  These are smart, smart kids who work very hard in their academics and choose to spend 5 hours a week working hard at yet another skill.  This is a dedicated bunch of young people.

In the title of this post, I mention the cost of picking up instruments instead of footballs so perhaps I should address that now.  Living in a college football heavy town, I often mourn the lack of attention and funding that is given towards such a positive experience.  Virginia Tech has just finished building its prestigious football team a new locker-room facility that was predicted as costing the school between $13 and $15 million dollars...that's right, $13-$15 million dollars!  In an online publication, the Virginian Pilot, the associate athletic director of the school is quoted as saying that the old locker room is "a little aged, and it really needs to be spruced up," and that it is "woefully inferior to other football locker rooms within the conference."  And this project comes after spending around $20 million dollars on a new basketball practice facility.  I ask you, how much money does the New River Symphony Orchestra demand?  I think it's pretty safe to say, "not much!"  I don't really think it would even cross the players' minds.  They play because they want to play - no bells and whistles attached!

So why my rant?  Because I want more people in the Blacksburg area to consider attending this Saturday's New River Valley Symphony concert.  These are incredible kids that work hard and deserve to have more of an audience in Burruss Auditorium come Saturday night.  Of course I am a little biased since I'm performing on the concert but I have to say that it goes beyond that.  I have decided to also perform in the cello section for the remainder of the performance because I am so impressed with these young musicians and I think others should take note as well.  No, it won't be like a Roanoke Symphony concert but I can promise you the musicians will be working just as hard, if not harder!  Need some more reasons to entice you to come?  Here are my top 10+ reasons why it should be on your calendar:
All right, I guess that's all I have to say except for one last thing...

I hope to see some of you there and if you do come, I hope you enjoy the show!


When: Saturday, May 1st, at 8pm
Where: Burruss Auditorium on the Virginia Tech Campus
Who: The New River Valley Symphony with James Glazebrook conducting and Erica Sipes, piano

Here are some links to some other posts I have written about this piano concerto in case you're interested:

A discovery about Beethoven's 3rd piano concerto and Clara Schumann

Let's play, "Stump the Pianist" - AARGH! (a.k.a. How Erica finally memorized the cadenza)

And if you are wanting to hear and watch a great pianist, Mitsuko Uchida, performing the entire piece, click here and scroll down until you see the YouTube videos!