Seeing myself in a work of fiction: Providence, VA, by Michael Abraham 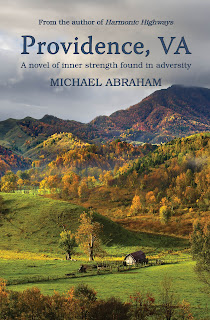 Quoted from the back cover of the book:

Sammy Reisinger is a 17-year old violin prodigy from a wealthy New Jersey family.  She has inherited a priceless Cremonese violin from her grandfather and is schooled in the classics.  Becoming enamored with traditional Appalachian music, she decides to visit the venerable Old Fiddlers Convention in Southwest Virginia.  While there performing, tragedy strikes, leaving her seemingly trapped and orphaned.  Providence, VA is the story of how she and her tiny host community deal with an epic disaster.

I can relate to much of that.  I grew up in San Francisco being surrounded by some of the best musical training, steeped in classical music.  I didn't have an old, valuable instrument but I was given what I needed - good instruments, pedigreed teachers, prestigious music camps every summer, and wonderful opportunities to perform locally and around the world.  Yet when my husband, daughter, and I moved here, to Blacksburg, Virginia, I instantly felt drawn to this part of the world - to the natural beauty, to the people, and to its music - bluegrass music.

Every year my husband and I take a day or two off to venture out into the surrounding area for a bit of a retreat from parenthood and from life "in the big city."  A few years ago our excursion took us to Pearisburg, Virginia, a small town on the way to West Virginia.  Driving through on the same day they were having their town festival, we decided to stop since there's no better way to get to know a community than to check these types of gatherings out.  While we were eating some lunch we sat and watched an older lady who was fiddling along with a younger man playing the banjo.  I was enthralled and a bit jealous.  They were just playing together - no music, no words to discuss how they were going to do each piece, no stress.  They just played on and on, seemingly reading each other's minds all along.  It was refreshing and exciting to me because of the amount of communication it seemed to offer in both a musical and non-musical way.

Some time after that experience I had the chance to accompany a young girl who was getting ready to perform a violin concerto by Haydn.  I didn't know anything about her prior to the first rehearsal but I immediately knew, once we had started, that there was something different in her approach to the music.  This very classical music was played with a flexibility and ease that I hadn't considered applying to Haydn's music but it felt right, especially in her hands.  It turned out this young lady grew up learning to fiddle and had spent some time competing in that field - fiddling was her first musical language.  I will never forget our performance together.  The way her face and demeanor were so relaxed yet connected to the music was so reminiscent of the couple we had seen at the Pearisburg fair and it's been something I've been trying to connect with myself ever since.  It's also part of why I have decided these past few years to focus on making music-making a joy, not just a work of great concentration and hard work.

So I can relate with Sammy on the musical side of things.

I can also relate to her as she finds herself displaced to a new community - one that is quite foreign to her but that, in general, welcomes her with a love and openness that is not always found in this success-driven world of ours.  As an outsider, finding oneself in such a different type of world can be a bit disorienting.  When we moved to southwest Virginia and I became involved with a cello studio in town that is made up of some of the most giving, supportive, and generous people I've ever known, I didn't know quite what to do with myself.  As a mom of a young child, I didn't know what to do with the offers of help - would accepting be a sign of weakness and ridiculed?  Would something be expected of me in return?  Why were they doing this?  Sammy deals with many of these same questions in Michael Abraham's story.  In the end, after figuring out our roles in virtually the same community, one in fiction, one in non-fiction, the answer to that last question - "why are they doing this?"

The community in this part of the country plays and lives the way bluegrass is played.  Life and music are not separate - they merge into a lifestyle that values people, community, joy, and music above personal gain and success.  Some people might say that such a view is a naive one and one that is sure to lead to failure and disappointment but I guess I'm willing to take that risk at this point.  Does this mean I'm going to forget playing classical music and start learning how to play bluegrass?  Nope, definitely not - classical is inside of me and I'll never let that go.  But I am going to keep trying to bring a little bit of that culture into our classical world.

I'm grateful that life has brought me here, for Michael Abraham's wonderful characters in Providence, VA, especially Sammy, and for the community that we now find ourselves a part of.  It's a beautiful place in so many ways.

Now we just need to jam!  Anyone care to join me?

Here are a few other posts I've written that have been inspired by music-making in this area:

P.S. - This book is also available for reading on the computer and other devices at Smashwords.