Travelling recently with my family throughout Germany and Switzerland brought to light for me a truth, at least in my book, about the importance of one's words, one's language, one's music. In an ideal world every word and every note that comes out of our being should be true to ourselves. They should communicate who we really are, what we believe in, and what we feel, all blended with our own previous experiences and encounters. When we take the risk to expose ourselves our hope is that we will be heard and understood by those around us. When we aren't, when people around us fail to really listen, when they argue right back or are unwilling to let go of preconceived notions or ideals, the consequence can be disturbing. It can cause us to question ourselves and reluctantly wander down a different path in search of another identity that is deemed more acceptable or noteworthy.

That is a path I have been on but am determined to wipe off my map.

Being in another country with our 6-year old daughter was an incredible experience but it also tested me as a mother in a way that I've often found myself tested as a musician. We were in a new situation for all of us and much of the time we were surrounded by a language that none of us spoke. Our daughter, a lover of words and language, found herself in the unique situation of not being able to understand what was going on around her. She depended on us to translate the culture around her, to explain how we were going to get from point A to point B without a car, to help her figure out what she was going to eat. As a parent, I was ready for that challenge armed with what I thought was going to be plenty of patience. I also assumed that she would be eager for our help and guidance. Little did I know she had not left her individual stubborn self at home - no matter what I said, even if I was just describing the weather outside, she either disagreed or simply didn't listen, even when I was trying to answer a question she had just asked me. After a relentless string of me being wrong, I felt completely helpless and found myself shutting down, reluctant to contribute anything. I no longer felt like being me. If my words, which I tried to speak in truth, were not being listened to or denied, what was I supposed to do?

Musically speaking I've had times like this too, when I've gotten together to play music but no matter what I tried to communicate my musical self, it was futile. Some might say this isn't surprising considering my main profession - accompanying or collaborating. This field, after all, spent many years in the shadows and our role started off as a pretty silent one. But that's not how I like to make music and it certainly goes against what I believe the purpose of music and music-making is. For me, music-making is about the sharing of musical and personal selves between performers, music-makers, teachers, audience members...everyone. It is a wordless way of connecting in a very personal way. It's not meant to cause arguments or to prove anything. It is not meant to be a way of putting people in their place - so and so is the real professional, or so and so doesn't really get classical music. Music is about pure expression. If the musicians I'm working with struggle to listen to what I have to say or would prefer that I simply reproduce note for note what they want me to say, I no longer feel like I'm expressing who I am, I'm reproducing what I'm not. I no longer feel like I'm making true music.

I know it can be hard to work with other musicians. It makes sense, especially considering the personal nature or it all. Perhaps that's why some can fall into the trap of just dictating what another musician should be doing in a collaborative situation. It's much easier to argue and command than to listen and meld one's own ideas with anothers. But is music born from such a situation really true music-making? I think I'd much rather take another road that involves cooperation, patience, and respect - a road that allows oneself to be true to oneself in all ways.

I hope to see some of you there on that path. I promise I'll listen!

Just about a month ago I confessed my fear and trepidation about a saxophone recital I was preparing for in my post, "Staring down the musical version of Mission: Impossible."  Now that I am officially on the other side of it all, I feel that I can safely and sanely report back on the whole experience and share some of what I learned.

I still do believe that this was the hardest music I've ever had to learn.  Both sonatas by Creston and Feld, were written in such a way that I simply couldn't read the music at any point in the process.  Creston's harmonic language was somewhat straight-forward and slightly predictable but it was dense and very chromatic.  Add to that the fact that he decided to not write using any key signatures, which means I was constantly trying to read tons of accidentals, and that led to one grumpy, nervous pianist.  As for the Feld, it is a fascinating piece and now I really love it but it is very, very different.  Full of 12-tone writing, dense chord clusters, challenging rhythm, lots of fast chromatic writing, and although I found it cool, reading music where one hand plays the retrograde of the other hand requires a different part of the brain than I'm used to using.

Playing music that caused new parts of my brain to light up definitely required some new strategies and when I wrote the earlier post I was just at the beginning of coming up with a plan.  Fortunately for everyone involved, the plan panned out and I feel pretty comfortable saying that the recital went off pretty well.  Does that mean it was perfect?  Well, most people probably know me well enough to know the answer to that and to know that perfection is not what I was expecting.  But what I'm most proud of is that I accomplished what my primary goal always is when it comes to performing - when the saxophonist and I walked off stage, particularly after the Feld, we felt like we were flying high.  In spite of the music's challenges and our limited rehearsal time, we clicked, we made music, and we were given the ever-so-wonderful encouragement from the audience of hearing audible gasps at the ends of every movement.  There's nothing quite like those uncontrollable verbal and emotional responses!  They were breathless, and we were literally breathless when we walked off that stage.  Oh, I love those moments.

So what did I learn through it all?  What did I have to do differently? 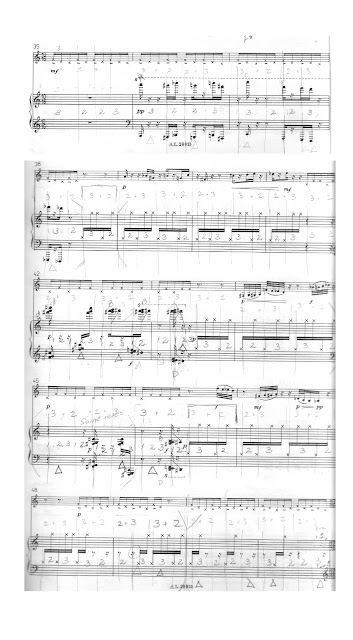 So there you have it!  That's what I learned.  Next time I face another round of "impossible" music I'll have to pull this out to remind myself that impossible is really only impossible when you choose to do absolutely nothing.


And thank you, everyone, for all your encouragement as I've been tackling this project.  Your suggestions, well wishes, and thoughts have been very appreciated!