Young pianists, this post is for you!
Think piano collaborators are pianists that couldn't quite cut it in the solo world?  Do you picture the demure, quiet, accompanist of long ago that silently shuffled to the piano and played in the shadows of the "real" artists?

Well think again!  I'm a little biased of course, but I love doing what I do.  And here's the thing - we need more young pianists that are interested in going down this path.  We need for you to start doing things now that will help you acquire the skills that make for a great collaborator.   Now is the time to start playing for friends that sing and play other instruments.  Now is the time to sightread duets with your teacher or a friend on a regular basis to pump up your sightreading skills. Now is the time to get a taste for the fun and satisfaction that can be had in this great role.

So what's so great about it?  I was hoping you'd ask.   Here's what I love about being a collaborator:


I'm sure I'm leaving things out in this list.  If any fellow collaborators want to chime in with some others, please feel free to leave them in the comments section.

The world needs more good, dedicated piano collaborators so sleep on this list and wake up ready to grab another musician with whom you can play.  If you're like me you'll never look back.  And if you need any more convincing, check out the sidebar on the right-hand side of the blog that says, "Blog posts about accompanying/collaborating."  I have had plenty to say about the topic.

Now get to it! Start thinking outside the box, grab a partner, and play!


It's like a playground for the mind that's always evolving and this past week has taken me to a completely new playground - one that I'm just seeing a tiny glimpse of but that I'm so very eager to explore.

The class in question is the accompanying class at Radford University.  Not to be confused with accompanying classes at most institutions, this class is one that is a required, year-long course that is taken mostly by vocal music education majors in their junior or senior years.  Most of the students have not taken piano lessons before and have only gone through the required group piano classes.  My job is to help them get to a level where they can accompany singers, either in a choral or solo setting, at a basic level.  This has proven to be a great challenge to me since they really aren't pianists.  In a post I wrote last year, Reflections on the first year of teaching piano sightreading, I discussed some of what I had discovered during my first semester of teaching in detail.  In today's post I'll move on from those observations to draw attention to one interesting experiment I've conducted this week and its surprising (at least to me) results.

First, here is what I've been frustrated with that I'm trying to tackle:
Determined to help them get over some of these issues I pulled out an exercise that taps into a technique I use all the time when I'm sightreading.  The purpose of it is to keep the eyes, brain, and hands moving in steady, rhythmic, synchronized way.  Here's what we did while we read piano duets together.  With me playing the more complicated bottom part as written I had them play the 5-finger position top part as follows:
It took them a few tries to figure out what I meant but once they did I think we were all shocked by the results.  On day one of this experiment, after only one attempt each, when they went to do the second play-through where they were focusing on the downbeats but allowing themselves to play what they could, they played virtually all the notes correctly at the first attempt without any problems with rhythms they had previously struggled to execute correctly.  And no stopping!  To top it off they all played extraordinarily musically, especially considering the fact they aren't pianists.  I was literally gobsmacked.

And the cherry on the cake?

I met with one of my students today and led her through our exercise with the same exciting results, only this time when I looked at her it looked like she was going to pop.  After saying, "Brava!" I asked her, "How did that feel?"  She had this enormous grin on her face and she said something along the lines of, "This was the first time I've ever played music and actually heard another part.  I heard your part - I heard mine.  It was beautiful!"  I asked her if she realized that she had done all the rhythms correctly and she said, "Really?  I wasn't thinking about them at all!"  Coming from someone to whom rhythm doesn't come naturally, that made my day.

So why did this work so well, at least this time?

Perhaps it worked because it showed them that their eyes and brain can take in quite a bit all at once without having to expend energy on each and every dot on the page.  This freed them up enough so that they could include their ears in the process.  They could hear the music that was being made and could respond in expressive ways.  In regards to the rhythms that they previously hadn't been able to do very easily, I now wonder if they do indeed have a grasp of rhythm but don't realize it themselves.  They don't trust that they can see a pattern and automatically be able to reproduce it without counting all the tiny subdivisions that require so much additional brain power.

We'll see what happens from here.  I realize it's just a start but wow, at least for this week, I'm thrilled and am eager to figure out what to do next.  If anyone has any thoughts or personal stories about this topic, please do share - I always learn a lot from all of you!

If you're interested in more ideas about sightreading music, feel free to check out my page devoted to the topic.

One musician's search for relevance in the working world

Those NPR stories.  They always get to me!  A few weeks ago as I was driving to work I fell victim to the oft-repeated "pull to the side of the road until the NPR story is finished" scenario only to find myself propelled into a month long soul-searching expedition which has led me to this particular blog post.  That would explain the month-long absence. I'm not quite sure what is to follow but everything that has happened in my mind and heart these past few weeks deserves some sort of mention.  So here goes.

It all started before I heard the story on the radio.  All the news about orchestra strikes, possible funding cuts for the arts and the talk of artists needing to step into the world of the marketplace, the increase of music school students that don't have any exposure to classical music prior to coming to college, my own daughter declaring her dislike of the genre, our current struggle to support ourselves working solely as freelance musicians - I quickly found myself thinking that what I do for a living doesn't serve much of a purpose to the world as a whole anymore and that it might be better for me to rejoin the "real" world in order to do my part, whatever that might be.  The prospect of having a steady, predictable income, of having our benefits taken care of, was turning into a mighty large, juicy, carrot that I was so tempted to grab and run. 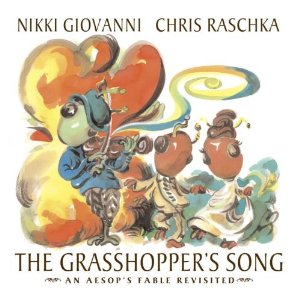 Local poet and professor at Virginia Tech, Nikki Giovanni, along with illustrator Chris Raschka, worked together on a children's book called The Grasshopper's Song back in 2008.  It's a retelling of Aesop's fable about the grasshopper that sat back and played music rather than being industrious like the ants who were busily and responsibly preparing for the winter.  Nikki Giovanni didn't like Aesop's moral to the story and felt that perhaps there was a different side of the story.  In this children's book she set out to tell the grasshopper's point of view and in the process to make an appeal about the value of the arts in society.   As Giovanni explains...

That got my attention.

Next I heard Giovanni quote a bit from the story.  In this scene Jimmy Grasshopper has brought a  court case against Nestor and Abigail Ant for not giving him the respect he deserves as a musician.  After being accused of being a clown and a slacker by the defense the grasshopper takes to the stand. Laurie Wren, the prosecuting attorney, questions him about why he feels he deserves anything from the ants.

"Jimmie sat even taller.  'Am I not worthy of my bread? Does not the work of my heart and soul earn respect?  I’m an artist. Is there no place for beauty, no solace for the ear, no hope for the heart?  Must everything be in the marketplace? Doesn't the marketplace itself need and deserve beautification?... Without art, life would be a big mistake.'"

I was moved and shocked hearing these words, especially considering where I was at that exact moment.  When I got to work I sat down in a bit of a stupor, pulled out the music to Gerald Finzi's "Eclogue," my current almost-as-good-as-chocolate piece of choice, and just played.  As predictable as a soap opera, I ended up with tears streaming down my face.  I was singing my own grasshopper's song.

In the weeks that followed I went through a lot of processing and re-reading of Giovanni's story.  I've even kept my distance from twitter in an effort to quiet my mind long enough to hear my own voice again.  For those of you who know my twitter tendencies, that's saying something!  After many ups and downs here is what I've concluded for myself about whether or not I should choose the path of the grasshopper or that of the ants:
I've waited for a while to write this post so that I could write it when my thoughts had stabilized and I do believe I'm there now.  I realize I'm bound to have some ups and downs as I proceed down the musical path on which I currently find myself but until something changes I am determined to pick up my fiddle and to keep on playing and singing Jimmy Grasshopper's song.  If I am accused of being clown or an irresponsible member of society, so be it.

At least I'll be happy.

Quick note:  If you are interested in purchasing the book but are discouraged by the reviews of the book on Amazon, pay them little heed.  It is actually quite interesting to read the comments since they reflect a common attitude we have in this country about the value (or lack of value) of the arts.  And is this book a "childrens'" book?  Well, as with most books in this genre, I imagine it can be enjoyed by children and adults of all ages but especially by adults.  Our daughter, who is now 7, loved it!