Being productive and creative while severely stressed

Last week I had one of those days where I felt there were tornado sirens and tornadoes going off in my head.
It was ceaseless.
All...day...
Even practicing the piano, which usually works to refocus me, did nothing for me. In fact, trying to practice brought my frustration to an even more unbearable level since that's usually my safe haven.
By the end of the day I was frustrated and exhausted from trying to accomplish something...anything.
The next morning I work up with my head and heart still in a state. I couldn't endure another day like the previous one so I knew I had to do something different. As I was getting breakfast around I was struck with inspiration in the form of a bag of chocolate chips. Yep, chocolate chips. Not fancy ones. Semi-sweet chocolate chips. (Thank goodness I have a family that feels they are a must-have pantry item!)
I pulled the bag of chocolate chips out, found a small, clear, glass bowl and ceremoniously poured about 25 of them into it.
Then I grabbed a large post-it note and was struck yet again with a bit of inspiration. I am by nature a list person. I have to-do apps on every device, armfuls of notebooks, and an office supply store-worthy stock of sticky notes so I have to-do lists everywhere but this time a different little voice than I'm used to inside my head clearly said 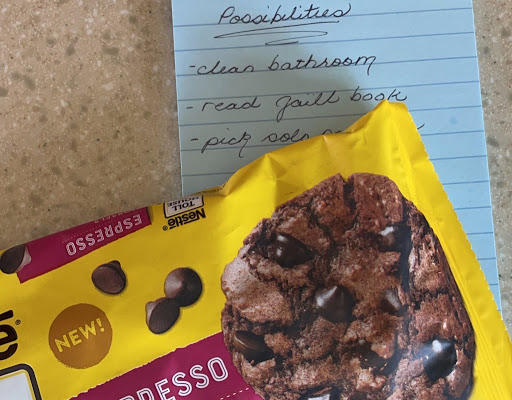 "Maybe the problem with being a busy body and having tons of ideas is that your to-do list will never, ever end. And if you judge the success of your day by whether or not you got through your to-do list you'll only feel like you failed. So write a possibilities list instead and see each one you accomplish as something to celebrate."

My to-do list habit may be fine a lot of the time but perhaps it's not always the ideal motivator. Which is why I decided to listen to that different little voice to try something a bit different and to get myself back on track. There was one more thing the voice kept telling me. 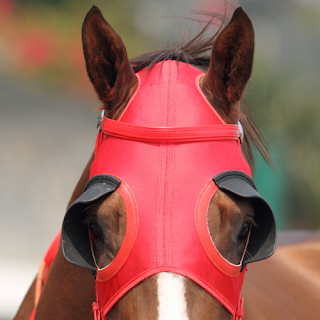 Usually I'm pretty good about focusing on the task at hand. I also tend to be a multi-tasker even though I realize that's not the ideal way to be. But in my previous day's state, the danger of having too many things on my to-do list and of relying on multi-tasking became painfully obvious. So I decided that during this experiment I was going to go through my day one "possibility" at a time. I would pick one and then put blinders on and focus on that one thing until it was done or until I had done a good amount of work on it and felt comfortable setting it aside. When I had successfully worked on a possibility I celebrated with a chocolate chip. One...chocolate...chip. I was quite amazed at how well this worked! By the end of the day I felt that I was back on track and that maybe I could even go back to my to-doist self. Or maybe I should just stick with the possibilities method/chocolate chip/blinders method?

It is rather tasty.

Tweet
Posted by Erica Ann Sipes at 5:06 PM No comments: