When I think about Bach's music, I rarely think to describe it as playful. Perhaps it's from looking at those serious portraits of the composer like the one here. Or maybe it's because his music can be unbelievably challenging, especially his finger-twisting fugues - the last thing I think of doing while playing a particularly nasty one is smiling. But I do believe Bach was fully capable of being playful, and spirited, and ebullient. He was, after all, a father to 20 children. I imagine there was quite a lot of laughter to be found in his home, and I also am guessing, thanks to this E-flat major Prelude, that there was also plenty of teasing, taunting, and childish terrorizing that went on.
Every time I hear or play this particular prelude, I can't help but think of a little teasing game my own family plays from time to time. In our household, we are very, very good at being serious, perhaps too serious. We are also good at being dramatic, usually choosing to air on the side of being melodramatic, of course. Well, when one of us notices what's happening, that we're all being swept down the river of pessimism and grumbles, he or she will say, "OK, that's it. Today is a very, very serious day. Nobody laugh. Nobody smile. Wait...what's that I see? Do I see the corners of your mouth starting to turn up?" We continue in this vain until we all burst out laughing or smiling. It never fails.
I think Bach and his family could have shared the same strategy. The prelude starts off happy enough but after a few lines, it seems to make a turn toward the more serious. This is where the play begins. He starts by alternating short, descending, laughing motives in the right hand - "Now don't laugh." This is followed up with a more serious, ascending, whining motive - "You must be serious." . After a couple of these exchanges, Bach starts into a hilarious sequence of material that repeats numerous times with what sounds like hiccuping, or laughing, or teasing in the left hand. At first the intervals he uses are sevenths but then in the last four measures of the sequence, the left hand plays 9ths - a very wide and odd interval, especially to be repeated over and over again, and especially in a piece by Bach. If he had simply bumped the second notes of the two-note hiccups up an octave, these motives would have sounded perfectly normal. If Bach could join in my family's little jibing session, I think he would have used this to break us down, sending us into fits of giggles. 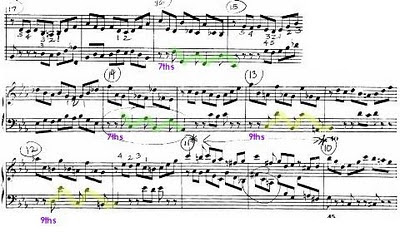 It works for me. What follows is one last struggle to keep drama in the picture which quickly fails and leaves me in a much lighter mood for the rest of the piece.
The E-flat major fugue, for me, is the contentedness that follows after such a silly family moment. With a renewed, more optimistic perspective on life again, the fugue is almost entirely free of drama or angst. And with surprisingly few subject entries, there is a lot of room for musical strolling, with no concern for the expectations or protocol expected with a fugue. But Bach doesn't forget playfulness all-together in this fugue. There are a handful of subjects in which the rhythm at the beginning is altered just slightly, changing the first note from a whole note to a half-note and transforming that one note into an upbeat.

Perhaps that's a subtle, slight tease that Bach throws in there, just to make sure we're listening...
...and smiling.