Performing for kids? All you need are... 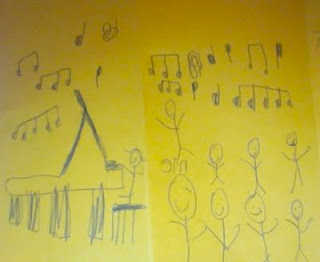 Squeaky chairs.  Yep, squeaky chairs.  Or perhaps I should say, "squeki chrs," as one kindergartener spelled it.
Well, perhaps you need a bit more but that was one of the somewhat surprising things we discovered that was a hit with just about every kindergartener that attended a recent kid's concert we presented.  I'm still somewhat new at putting together classical concerts for little people so I still get pretty nervous and frantic in the planning stages but what I'm starting to figure out is that kids don't necessarily need a whole lot to make them happy and to make a concert of this sort successful.  And considering how important I think it is for us musicians to get out there and give young people some sort of musical experience, I think it's worth any extra effort it does take.
Aside from the squeaky chairs, some of the other things that the kindergarteners that left an impression on them were:

And the thing that the kids loved the most, even more than the squeaky chairs?
Looking back on it now, it makes sense that this last part of their program left such an impression on them.  There is something wonderfully and delightfully overwhelming about being on stage, surrounded by music and musicians in such an intimate way.  It can be exciting, exhilarating, and fun - that's why I do it!  Knowing that 80 or so kindergarteners got to experience what I feel up on stage every time I perform makes me unbelievably happy.  It makes me feel like I've given them something special to walk away with and that might just inspire them to try playing an instrument themselves someday and to actually enjoy it.

Who knows.  Maybe someday some of the kids that were in the audience for this concert will be performing a kid's concert of their own.  Let's just hope they have some squeaky chairs too!

Email ThisBlogThis!Share to TwitterShare to FacebookShare to Pinterest
Labels: music in community, youth in music