I really, really love this second episode of my "Musical Investigations" series not only because the music in question is absolutely hilarious, but also because I had a major lightbulb moment when I found the solution to my own problem.  The excerpt in question is from Leonard Bernstein's, "A Big Indian and a Little Indian" which is the fourth song in his adorable, clever song cycle, I Hate Music.

There are several things about this song that initially freaked me out.
On a positive note, the idea behind the song is hilarious.  It's a little kid telling a riddle, complete with several bars of vamping while the singer is waiting for the audience to solve the riddle.  I love it!

So how not to freak out?  How could I see this music in a simplified way so that my brain and hands didn't freeze up?

Take a look at this section... 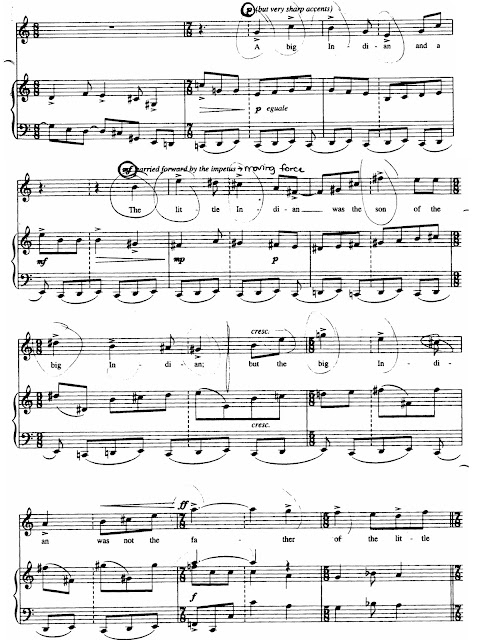 This excerpt demonstrates one of my favorite methods of simplification because one hand, the left hand in this case, simply repeats the same pattern over and over again, leaving the eyes and brain free to concentrate on the other more difficult and complex line.  And at closer examination, that right hand part is only made up of a few different ingredients:
Not so bad when I looked at it that way.

To put it all together I first worked on the right hand, using the patterns I had discovered to learn the part in a way that kept my mind engaged.  Then I looked at the left hand part and set up the vamped pattern, playing it over and over again until I felt like I was in a groove and didn't need to put any thought into it.  Once in that groove, I added the right hand in, trying not to see every individual note but instead seeing the patterns with a relaxed mind and relaxed hands.  After a few times under tempo, I got it.  I understood it.  It made complete sense and I realized that I didn't even have to pay attention to any of the meter changes.

What was the best part of having figured this piece out?  I could actually listen to the riddle and laugh right along with the audience.

I think Lenny would have approved!