I feel I need to start with a warning - my husband, upon hearing my excitement about the contents of this post, declared to me, "You know you're a big nerd, right?"  If you're a music nerd like I am, feel free to continue reading.  But if you're not, you may want to reconsider.  I have a feeling my husband won't be adding this post to his reading list.

The piece in question for this little musical investigation is the last movement of Mozart's F major piano sonata, K. 332.  In the development section there is a passage that is thoroughly entertaining - a whirlwind of sixteenths and winding, chromatic eighths that I had a sneaking suspicion might be a bit tricky to memorize because of the tiny differences between each of the repetitions. 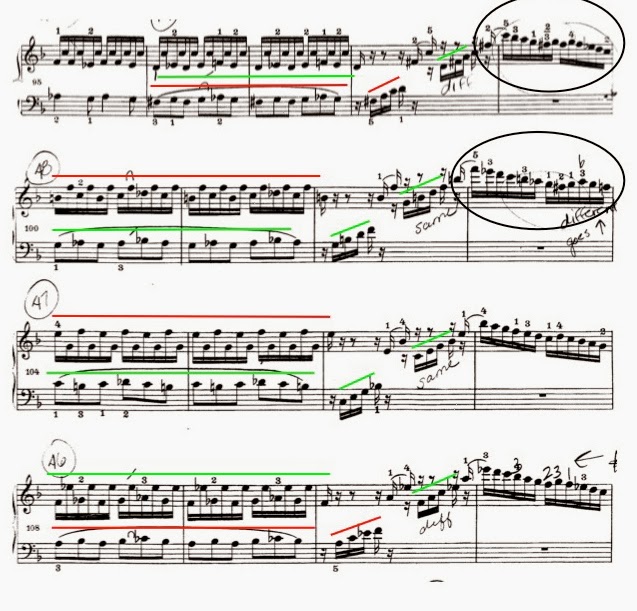 I have a bit of a love-hate relationship with passages like this; I can get overwhelmed with all the details but at the same time I take great interest in tackling a challenge such as this one as if it were a puzzle or a game.  I thought it might be interesting for some to see my process.  Keep in mind no two minds are alike so what I see in this passage may not resonate with or make sense to anyone else.  I do believe, however, that it's the process that is most important.  It gets us one step closer to being in the mind of the composer and that can be a very exciting place to be.

One of the first things I noticed is that in measures 98 and 110 the figuration in the left hand on the first beat is a triad in the first inversion.  If you look at the excerpt above, all figurations that are in the first position are marked with a green line.   All of the other figurations that are similar throughout this passage are in root position and marked with a red line .  It is a discrepancy like this that can often irritate me, making me want to scream at the composer saying something like, "Why must you do that to me?!"  Actually, I do end up asking that question, only a bit more politely, which then leads me to asking other questions that help me make some sense of what the composer was doing.  In this case, I noticed that in the preceding two measures in both cases, the left hand's eighth-note chromatic figuration also starts on the same note - the third of the root position triad.  My next question is, "So what would it have been like if Mozart had chosen to start those initial figurations on the root of each triad, just as he has the right hand in the next beat?"  First of all, if he had done that, the right hand and the left hand at the beginning of measures 98 and 110, would be playing the same note - "D" in measure 98 and "F" in measure 110.  I played it that way a couple of times and to be honest, it's pretty thin and uninteresting, at least to my ear.  Now I get it!  Now I don't feel like throwing the music across the room.

With two annoyances transformed into "aha" moments, there was only one irritation left to soothe.  I noticed that the figurations in the right hand in measures 107 and 111 are the same yet the ones in 99 and 103 are both different in the middle.  You have to look carefully to detect the difference but it's there.  Did he really have to do that?  Couldn't he have used the exact same figuration for both?  I believe so.  And it sounds ok.  Time to dig deeper again.  I noticed that both of these figurations, unlike the other two, are in harmonic minor so there's that interesting augmented second to play around with.  By changing the figuration Mozart seems to be playing around with this fact.  In measure 99 he places the augmented second at the end of the figuration which to my ear helps propel the ear forward to the downbeat of measure 100.  In measure 103 the second is right before the second beat which serves to emphasize the middle of the measure, not propelling us forward as much as he did in the previous instance.  Hmmm...interesting!

At this point I want to re-emphasize that I have no idea why Mozart did what he did.  I don't know if he even knew.  But going through this little dialogue with him, experimenting with what could have been versus what is actually there and coming to the conclusion that what I need to play is really pretty cool makes it a lot easier for me to face the passage over and over again.

So the next time you find yourself growling at a composer, I encourage you to grab a trowel and try this exercise.  Digging deeper can get you much more than just a handful of worms.


PS - Feel free to leave your own thoughts in the comment section.  And if you want to just let me know that you too are a music nerd, I'd love to know that I'm not alone!