Lessons about music and accompanying from a cricket 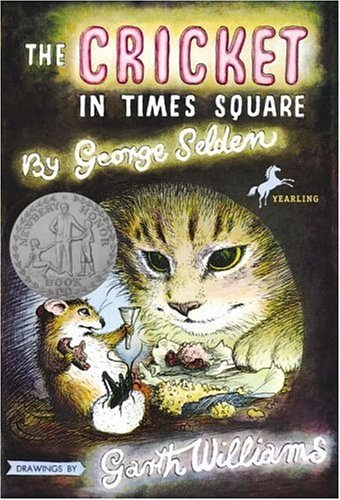 I've always loved children's literature which makes having a child a wonderfully convenient excuse to revisit it all.  Last month I was introduced to a classic tale which I had somehow missed growing up - George Selden's The Cricket in Times Square.  It is a sweet story about a cricket from Connecticut who suddenly finds himself in the hustle and bustle of New York City.   While reading about Chester the cricket's adventures in the big city I was surprised to stumble upon a page that reminded me of the value and power of music.  After accidentally burning down the newstand owned by the Bellini family and where he resides, the distraught cricket does what any musician would do - he cries through his music-making...


So Chester started to chirp again.  He was in such disgrace anyway, what difference could it make?  The piece he was playing was called "Come Back to Sorrento," and by the greatest good luck, it happened to be Mama Bellini's favorite song.  Back in Naples, Italy, when Papa was courting her before they came to America, he used to come beneath her window on a moonlit night and sing this ballad to the plunking of an old guitar.  As the cricket chirped, the whole scene came back to Mama: the still, warm night, the moon shining down on the velvety Bay of Naples, and Papa singing to her.  Tears welled up in her eyes as she thought of the bygone times, and very softly she began to murmur the words to the song.

Music and memory - such a powerful a combination.  And one that can magically turn the lights on a moment of tragedy with just a few heartfelt notes.

Even better, the story continues with this paragraph that gave me chills.  It's a wonderful lesson in the art of collaborating...


Chester Cricket had never played with so much skill before.  When he heard Mama singing, he slowed his tempo so she could keep up without straining.  When she was loud, he was too--and then softer when she got choked up with emotion and her voice dwindled.  But always his chirping carries her along, keeping her on the right beat and the right tune.  He was the perfect accompanist.

What I love about this passage is that it shows a lot of understanding about what it is I do at the piano - that my job is more than that of a musician, that it also involves sensitivity to my partner's state of mind and his or her needs at any given moment.  I wonder if George Selden was a collaborative type himself.  He definitely knows what he's talking about!

Most children's book authors do.

Even when you're not a kid.

Email ThisBlogThis!Share to TwitterShare to FacebookShare to Pinterest
Labels: collaborating/accompanying