Playing around with PlayScore 2 - an app for every musician

As a professional piano collaborator and accompanist I am very protective of my job. It makes sense then that I would be wary of apps and videos that offer accompaniments for instrumentalists and singers to use in order to learn and practice their music. When I was approached recently by the folks at PlayScore 2 about their app, my initial reaction was to politely respond that I don't do reviews on my blog and to leave it at that. But before I responded, I took a few moments to watch one of the videos they had sent along in their email. It had caught my eye because it was titled, "PlayScore 2 for Choir Directors and Singers - Make a Playable Rehearsal Score."


I had recently had a discussion with a college voice student I accompany about the challenges that she has as the choir director's assistant. To insure that everyone in the choirs has the tools they need to learn their parts, she had been regularly taking the time to record parts and combinations of parts and sending them to the singers. Unfortunately this was a process that was taking a lot of time and energy out of her already busy days as a student. After watching the PlayScore 2 video I was excited to check out the app for myself and to see if it was easy and effective enough to use to truly benefit choir directors and their singers.

For the past month or so I've been exploring this app from many different angles. It's one that in my mind is a bit like the Swiss Army knife of music apps. It can serve many different purposes in many different situations for many different types of musicians.
Are you a choir director, assistant, or choir member?
As mentioned earlier in the post and in their video above, you can create practice recordings using any combination of parts, including or excluding any accompaniment parts as well. Email the files to choir members and they can play them back on their own devices within the PlayScore 2 app. Only the person creating the tracks in this instance would need a paid subscription. Singers can open and playback with just the free version.

Is reading music notation or sightreading something you're working on? 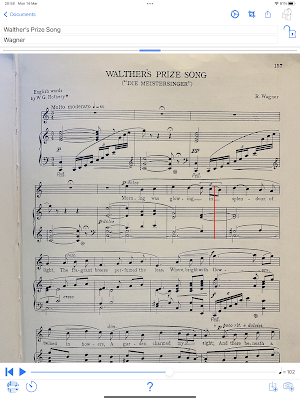 Scan the music you want to read in and then use their playback features, which includes a scrolling red vertical bar (see image to the left) and the ability to change tempo, to help you follow along in the score. For sightreading practice, this is one way to encourage you to keep on going when you make a mistake.
Would you like to have a way to practice and play with another part?
Playing with an app is not the same as playing with real musicians but PlayScore 2 can help in the practice room when you are by yourself. During the pandemic, as a piano collaborator at a college, I've been spending hours and hours recording accompaniment tracks for singers and often times I choose a tempo that isn't ultimately what's best for the singer. There can be a lot of wasted time spent re-recording to try to get the "perfect" tempo. With PlayScore 2 they won't necessarily be hearing a real piano while they're practicing, but they will be able to choose a tempo that works for practicing or experiment with different tempos for performance. If a particular key doesn't feel quite right, choosing to transpose the piano part can help find out what key does work. I also love that you can loop tricky measures.

Do you want to be able to easily import music into notation software so that you can make your own arrangements?
I play in a trio that is made up of piano, flute, and clarinet. There isn't a lot of music written for this combo so we often have to make our own arrangements. Up until now this has been a painstaking process since I don't have a fancy setup - I've had to hand enter each note into Musescore. I try to take joy in the process but usually I end up pretty tired and frustrated. This past week, with PlayScore 2, I've been able to scan in 2 different pieces which I've then converted into XML files and imported into Musescore. Voilá! Notes are instantly there with dynamics, articulation marks, dynamics...you name it! It's made the process of arranging so much easier. The app works with other music notation software such Dorico and Sibelius.
Do you have a visual impairment?
Using the same process mentioned in the previous paragraph, PlayScore 2 allows you to create XML files which can then be imported into braille music notation apps. Or you can use the app to learn the score by ear.

Closing thoughts
After using the app for several weeks and talking with the folks at PlayScore 2, it's clear to me that the technology that's used to make this app work the way it does is pretty remarkable and is constantly being improved upon.
I've also learned that it is very important when scanning music in to follow their recommendations in order to get the best possible results. You don't need a fancy camera - a good phone is all you really need. They have thorough instructions in the app itself and also on their webpage. They also make it clear that the quality of the original score impacts the end result on the app side of things. At this time the technology can't read hand-written scores or one that use a font that looks handwritten. It also doesn't do well with really old editions. If you get stuck you can also contact them directly. They seem more than happy to help troubleshoot whatever issues you might encounter.
And last but not least, the price. You can pay for the app monthly for $5.99 or you can save quite a bit of money, something I'm partial to, by paying for a year at a time which is $26.99. Either option, but especially the year subscription, seems more than worth it, especially if you can use the app for multiple purposes. Right now the app is available for both Android and Apple devices. They are also working on making a PC accessible version. Stay tuned about that!
In summary, although I don't regularly agree to write about products on my blog, I wanted to make an exception this time since I found so many great uses for PlayScore 2 and have already recommended it to several musicians. Rather than seeing something like this as a threat to my job, I see it as a tool I can use to enhance what I already do as a coach, collaborator, teacher, and performer.
Give it a try and let me know what you think!
Tweet
Posted by Erica Ann Sipes at 7:27 AM