This post might seem like a it's a bit off the beaten path but I feel like I need to write it...for myself, but also for anyone else out there that might find themselves in a similar place.
I feel like I am two different people - Erica the musician, and Erica the mother.  There's nothing original in this concept - we all find ourselves stepping into different hats on a regular basis but I am struggling right now because I keep throwing off my mother hat and not wanting to put it back on.  This became painfully evident this past weekend when my daughter celebrated her 5th birthday.  Most mothers I know and read about approach such a milestone with incredible sentimentality, pride, and unrestrainable joy.  I, on the other hand, spent much of the weekend going through the motions of being such a mother, but feeling an overwhelming urge to ditch everything and run to the piano to practice instead.  Perhaps some would say that I was just in denial...that I was avoiding my true feelings about my daughter growing up...that I was just stressed out by the whole birthday scenario.  But that wasn't it.  As the weekend dragged on and Monday (the actual day of her birthday) was upon us, I slowly began to feel that part of the "problem," if you can call it that, is that I am addicted to making music.  Making music, especially performing music, makes me happier than anything else and I have to tell you, as a mother and a wife, this is one scary realization, feels a bit unhealthy, and makes playing my "mother" role quite challenging.
So a question I had when I came to this shocking revelation was, "Is it really possible to be addicted to something like music?" To find out the answer, I pulled out my handy-dandy copy of Daniel J. Levitin's book, This is Your Brain on Music-the science of a human obsession, and discovered this on page 189:

In the landmark study in 1999, Anne Blood, a postdoctoral fellow working with Robert Zatorre at the Montreal Neurological Institute, had shown that intense musical emotion - what her subjects described as "thrills and chills" - was associated with brain regions thought to be involved in reward, motivation, and arousal: the vental striatum, the amygdala, the midbrain, and regions of the frontal cortex.  I was particularly interested in the ventral striatum - a structure that includes the nucleus accumbens - because the nucleus accumbens (NAc) is the center of the brain's reward system, playing an important role in pleasure and addiction.  The NAc is active when gamblers win a bet, or drug users take their favorite drug.  It is also closely involved with the transmission of opioids in the brain, through its ability to release the neurotransmitter dopamine.  (Italics added by me.) 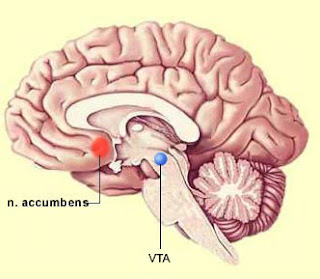 Levitin then goes on to describe some further research he and Vinod Menon had conducted.  In the end, they were able to determine exactly what was going on in the brain while people were listening to classical music.  I am assuming that these same findings also apply, if not more, to people that perform classical music.   In fact, I would venture to say that performers can get even more addicted since music-making and performing can increase our self-esteem, serve as an intimate social outlet, and serve as an emotional release.  How could this not get addictive?  And another question, "So what's wrong with being addicted to music?"
With most mothers I know, there is an innate addiction, an incredibly wonderful addiction to one's own offspring.  Although many people might not believe me, I haven't experienced those maternal, rock-you-to-the-core feelings with my daughter.  I won't dwell on examples or explanations, but I will say that I have dealt with post-partum depression and severe anxiety ever since she was born and have been on medication to ease these problems.  She was never cuddly and still isn't, I couldn't soothe her when she was a baby, she is a clever girl that likes to constantly and intentionally challenge boundaries, she has always had a difficult time trusting us... Our daughter is a beautiful, loving girl but we've been through a lot since day one and I still feel like I never bonded with her in the way I see other mothers bonding with their children.  That said, my experiences with motherhood might explain why I would rather be practicing than playing or taking care of my own child.  Yes, it explains it at least partially but I have to tell you that it makes me feel like an absolutely horrible mother.
So where do I go from here?  I believe in making lemonade out of lemons so armed with these acknowledgements, I'm going to trudge ahead.  I won't give up my music - that's impossible.  But maybe I can find a way to make my passion for music form a bridge between my daughter and myself.  I had a glimpse of this being a solution the other day when my daughter and I were spending some time in the music room together.  I sat at the piano (surprise, surprise!) and began improvising.  She, dressed in a new mermaid costume, immediately started acting out and choreographing a dance based on what I was playing.  She is a very sensitive, creative girl and she responded to every nuance in my piece.  During that time, which lasted about twenty minutes, I felt a glimmer of connection between us and therefore a foretaste of what can be, hopefully sooner rather than later.

Oh, and for the record, I really am a nice, loving person!  At least I think I am.
Posted by Erica Ann Sipes at 1:49 PM

Email ThisBlogThis!Share to TwitterShare to FacebookShare to Pinterest
Labels: motherhood