As the dust stirred up by the postman's horse dissipates, we see a tired man standing in the middle of a crossroads. The excitement of the posthorn's call and the hope it represented in the previous song, "Die Post (The Post)" shatters with the entrance of the piano at the beginning of "Der greise Kopf (The Grey Head)" With the stark chords in the left hand, I see and hear agony and exhaustion, especially as the right hand melody slowly crumples, prior to the voice's entrance.


I find the text of this fourteenth song a bit baffling but perhaps it helps in signaling a shift in psychology. Our haggard friend opens by talking of the frost-tinged hair that fools him into thinking he is an old man. Is this something to be lamented? I would normally think so, at least with my modern-day self conscious thinking. But in this poem, our character actually rejoices. Schubert subtly echoes this ironic response by taking the "crumpling" line one hears at the very beginning and transforming it into a simple descending melodic line, completely free from angst.


In the second verse, we see another puzzling reaction. When the frost melts away and his youthful hair is revealed again, he complains of "how far it still is to the grave!" Now wait a second. We're talking about graves all of a sudden? I thought he was fleeing a hurtful situation with his beloved...what's this talk about death? Whereas much of the first half of this song cycle dwells in the past and in our character's present state, our traveling musician now seems to yearn for a conclusion to this journey in which he finds himself. It is as if he is standing in those crossroads wishing that he didn't have a choice as to which way to proceed, that the only path to take would be a journey towards his own mortality.

Here is a video of Ian Bostridge and Julian Drake's "Der greise Kopf."

So has a decision been made? What happens next? First listen to the transition between "Der greise Kopf" and the next song, "Die Krähe (The Crow)" and try to sense where Müller and Schubert are taking us.


"Die Krähe" snakes its way out of the previous song, shifting our glance away from the path before our friend to a haunting crow above. Even the piano part seems to hover above the voice for much of this song, throwing off the musical balance we have experienced thus far. Time also seems suspended as the protagonist eerily begins to address this bird that seems destined to accompany him on his journey and through this song, we become increasingly aware that the path our friend seems to have chosen is the path that leads to his own grave. The climax of this song occurs with words that seem to support this, as he asks the crow to provide him with the only faithfulness he knows by accompanying him to his grave. It is only after this morbid request that the piano part descends to the lower half of the keyboard for the postlude, helping us to return to the question at hand again. I have little doubt this time, however, of where I think we might be headed.

Before I end this post, I want to point out something that Schubert did in "Die Krähe" that I find particularly interesting. There are three phrases in this short song that are five measures long - the introduction, the climax of the song that I just discussed above, and the postlude. At least to my understanding, composers tend to organize music into measures of an even number. Phrases are often 4, 6, or 8 measures long, for instance. I think this is because phrases of these lengths have a more natural feel to them - they lend themselves to more of a feeling of resolution.  So in using five-measure phrases at significant structural points in the song, I get an off-kilter, slightly uncomfortable feeling. Here is the introduction played first as if Schubert had written it as a four bar phrase and then as he actually wrote it. I've included the music so that you can follow along if you'd like.

It was too difficult for me to rewrite Schubert's fantastic climax to show the effectiveness of his 5 measure phrase there, but when you watch the video below of the entire song you can listen and see whether or not Schubert's tool affects you in any way. Here is the music for the climax in case you'd like to follow along. 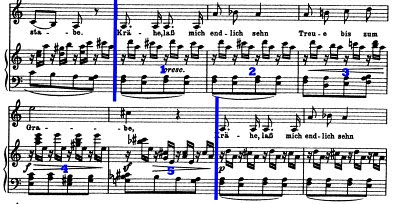 Phew...another long post. Thank you for hanging in there with me if you did! As a reward, here is an absolutely phenomenal animated video created by Warren Criswell that I discovered.  I dare you not to get chills!  I'd recommend letting the video play once through without the sound so that it can load entirely.  Then play it again with the sound up - it should run smoothly.  It's worth the fuss!


The Crow from Warren Criswell on Vimeo.

If you'd rather not deal with the animated version, here's Ian and Julian again:


Other posts in this Winterreise series:
The beginning of my own "Winterreise"
Beginning with a farewell: "Gute Nacht (Good Night)"
When music is more than music: Winterreise's "Die Wetterfahne (The Weathervane)"
Back on the road again: "Gefrorne Tränen (Frozen Tears)"
Psychology through music: Winterreise's "Erstarrung (Numbness)"
Finding a place of comfort: Winterreise's "Der Lindenbaum (The Linden Tree)"
Images of snow and ice, images of a frozen heart - "Wasserflut (Floodwater)" & "Auf dem Flusse (On the River)"
"Sturm und Drang" encapsulated in song: Winterreise's "Rückblick (Backward Glance)"
No rest for the weary: "Irrlicht (Will-o'-the-wisp)" and "Rast (Rest)"
Experiencing a lucid dream through music: Winterreise's "Frühlingstraum (Dream of Spring)"
On the edge of a dream: "Einsamkeit (Loneliness)"
Lifted above despair: Winterreise's "Die Post (The Post)"
A lesson in painting with words: Winterreise's "Letzte Hoffnung (Last Hope)"
An unsuccessful attempt at resisting sleep: "Im Dorfe (In the Village)"
Nearing the end of one man's journey: "Der stürmische Morgen (The Stormy Morning)" & "Täuschung (Illusion)"
An intimate view of facing one's fate: "Der Wegweiser (The Signpost)"
Waiting for Death: "Das Wirtshaus (The Inn)"
Seizing control of life & death: "Mut (Courage)"
One final breath: "Die Nebensonnen (The Mock Suns)"
What remains: "Der Leiermann (The Organ-grinder)"
Posted by Erica Ann Sipes at 4:03 PM